* In case of any delay in receiving the OTP, you may verify it later. Please proceed without verification.

Enter your City name or Pincode

Mandvi is a municipality and a city in the district of Kutch in Gujarat State. It used to be a very important port of the area and also the summer retreat for the King (or Maharao) of Kutch State. Earlier the city was surrounded by the fort wall. One can still behold the ruins of the fort wall at the very place. The Kharva caste was the first who started building ships in Mandvi and the city boasts to have a 400-year-old industry in ship building. The Kharvas still construct small ships made of wood. 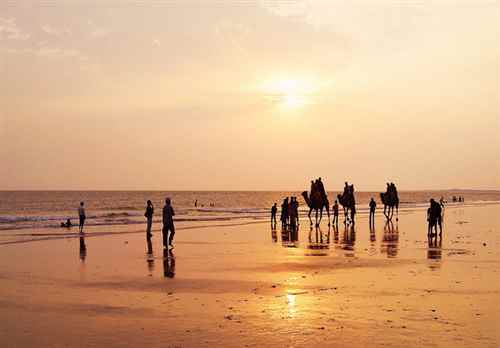 The port city of Mandvi is positioned at 22.81 degrees in North and 69.36 degrees in the East. At this very site the Rukmavati River joins Gulf of Kutch. Mandvi is nearly 56 kms away to the south of Bhuj. The city is located at a distance of 446 kms from Ahmedabad. The elevation of Mandvi city is 49 feet or 15 meters.  According to the census of 2001, the population of Mandvi was 42355. Gujarati, Kutchi and Hindi are the predominant languages of Mandvi.


Art and Culture of Mandvi

Mandvi is influenced by the Kutchi and Gujarati culture. The majority of Mandvi’s population comprises Bhatalas, Brahmins, Muslims, Mistris, Jains, Brahmkshatriyas, Kharvas and Lohanas. The nearby villages of Mandvi such as Moti Rayan and Nagalpur also adopt the same culture. The town of Mandvi mainly belongs to the seamen and merchants, both of them get benefits from each other.
Mandvi is very popular for its traditional craft and heritage. The city offers the tourists to splurge on a variety of attire with Kutchi hand-embroidery, Bandhni sarees, block printed sarees, tie & die sarees. The place is also famous for shell work and silverware. The ancient royal buildings, temples and chronological sites are examples of Mandvi heritage.

In the year 1580, Khengarji I (who was Kutch State’s Rao) established Mandvi. The name of the town “Mandvi” is said to be derived from the Sage Mandavya who dwelled here. The Sage was also popular as “Am Baba”.

According to the legends of the Kshatriyas of Kutch Gurjar, a large number of clans of Kutch Gurjar community particularly the Rathod, Gohil, Jethwa, Bhatti, Visavaria Brahmins and Solanki clans transferred to Mandvi from Dhaneti between the fifteenth and sixteenth century AD.

During the eighteenth century the merchants of Mandvi jointly possessed a fleet of four hundred vessels and continued to trade with Malabar Coast, East Africa and Persian Gulf. In the beginning of nineteenth century, Mandvi was a vital port of entry for Sindh, Marwar and Malwa.

At that time there were 2 popular trade routes- Desert camel caravan and the Maritime spice, and Mandvi was at the meeting point of these two trade routes and served as a major trade center. Initially Mandvi was a fortified town which comprised a fort wall having a stone work of 8 meter height and 1.2 meter width. This fort had a number of gateways as well as twenty bastions. However, presently majority of the wall has vanished. The southwest part consists of a bastion which is the biggest one and it also serves as lighthouse.

In the earlier times when even steamboats had not arrived, Mandvi was a wealthy and promising town and earned about 4 times more money from export alone rather than import. Mandvi was the most financially successful town of Kutch State which was even wealthier than Bhuj(capital of Kutch State).
The Mandvi Port was used by the Mughals for imports, exports as well as for pilgrimages towards Mecca.

Dabeli which is one of the famous snacks of the Kutch State, was invented by Keshavji Gabha Chudasama who used to live in Mandvi during the 1960 era.

Comments / Discussion Board - About Mandvi